Eastern’s Student Government welcomed a guest speaker to discuss pronouns and gender diversity to the student senators on Wednesday at 7th Street Underground.

After calling the meeting to order and roll call, Executive Vice President and Interim-Speaker of the Senate Report, Payton Ade, introduced the guest speaker, Tanya Willard.

Willard is the coordinator for the Gender and Sexual Diversity Center, also known as the GSD Center, which is in the lower level of Stevenson Hall. 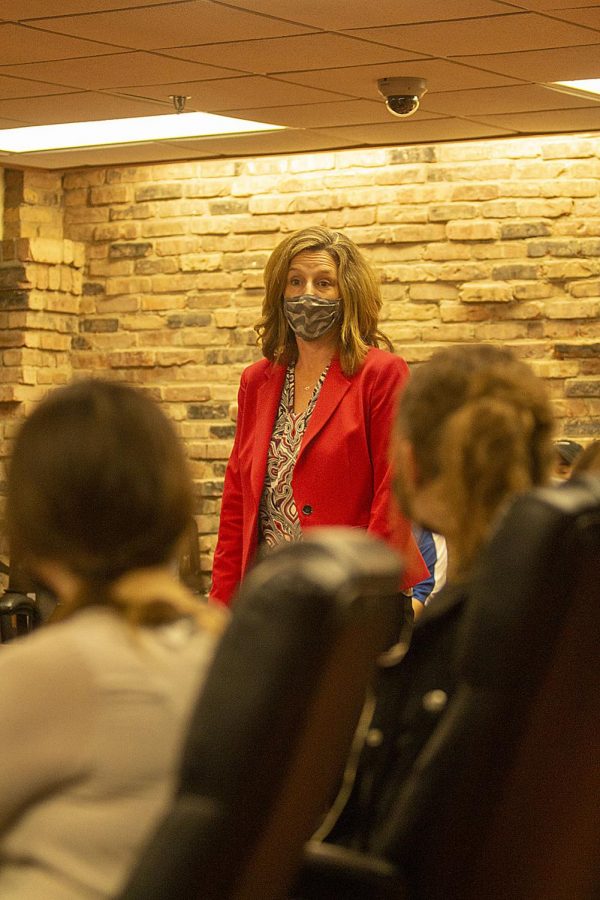 She addressed the importance of pronouns as identifiers and the fact that pronouns act as a method of affirmation for an individual.

Willard also stated that everyone has pronouns, there is not a specific group of people that are the only ones with pronouns.

She also said that pronouns may vary for people from day to day, or even years later.

According to Willard, pronouns may differ according to environment and who somebody is around.

Tanya also stated that messing up pronouns is bound to happen at least once.

Willard discusses what to do when somebody accidentally misgenders another person by using the wrong pronouns.

The speaker also addressed the different types of pronouns, along with some that are newer to society.

Willard announced that October 20 is International Pronoun Day and the GSD Center will be tabling outside Doudna, passing out pronoun buttons.

Blanca Vilella, a junior political science major and senator of the Student Senate, talked about how she felt about Willard’s presentation.

“I loved it,” Vilella said. “I feel like I was raised in such an accepting household and when I was little, I was always so confused on what I wanted to be or who I wanted to be. So, I like that it’s bringing more light to this and letting people know that we’re open about pronouns, and they’re allowed to be open to stuff about that.”

She also learned more about pronouns from the presentation.

“I did learn a couple new pronouns, like ze, and stuff like that, which is shocking because I’ve never heard of it,” said Vilella.

Kate Alexander, a senior political science major and student senator, talked about how she learned about the “neo-pronouns” from the presentation.

“I learned a lot, but I actually didn’t know which I was surprised about because I’m up to date on some common courtesies but not on the full list of pronouns,” Alexander said. “I wasn’t aware of the additional ones that are newer.”

Payton Ade, a sophomore political science and history major and member of the Student Senate board, talked about the speaker and what they thought about the presentation.

After Willard concluded her

presentation, Senator Ade proceeded the meeting and addressed that there was no old business and no new business.

Executive reporters gave their own announcements and updates regarding the subjects covered from their last meeting. Some of which include the open positions on committees, the need for more members of student government to meet quorum, different programs that have been addressed in their previous meeting and the possibility of forming constitutional revision and bylaw revision committees.

enamed, I do try my hardest to get it renamed and you will have my vote of the student body.”

As for announcements, Anne Flaherty, Vice President of Student Affairs, encourages students to submit their vaccination status to avoid a $150 fine.

Efforts to track diversity in journalism are lagging

Prev Next 1 of 75
Popular Topics

Efforts to track diversity in journalism are lagging

7 Ways to Boost Your Recruitment…

15 hours ago
Prev Next 1 of 75
Required 'Candidate' login to applying this job. Click here to logout And try again